Today, I got a comment on a two-month-old post that was a laughable legal threat - you can read it in the comments to (this post). Small hint: public speech isn't protected by copyright, and public hate speech is even less so.

This, of course, led me to visit one of my favorite places on Facebook, the psycho-Disneyland that is No Peace For Predators. I admit, I haven't been there in a while, mostly because I don't have enough alcohol to combat the stupid endemic in the comments, but I made an exception today. So, what's our favorite "non-violent" vigilante group been up to? For starters, they've been busy putting out warning flyers for various zip codes, listing names, addresses and pictures of sex offenders living in that area - but only so you're aware of who lives in what area. They wouldn't advocate violence against those people, no sir. Breaking into someone's house? That would be wrong. 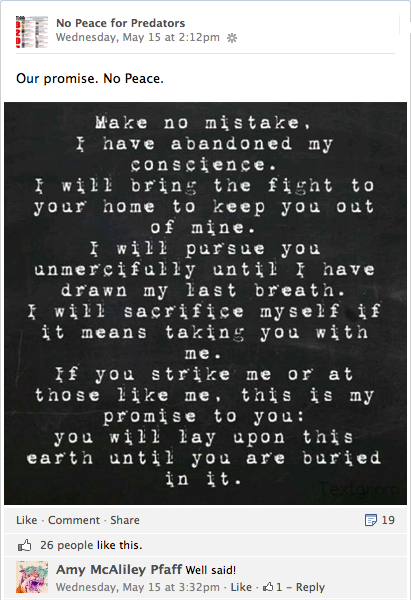 In my post "The Hit List", I wondered what would happen if someone decided that sacrificing their life to take out one of the "monsters" was an equitable trade. I fear we are getting closer and closer to that time. Some, like the widow of Gary Blanton, would argue that it's already begun.

Constant violent imagery and statements show NPFP's true intentions, and while they themselves may never follow through, their rhetoric may stir the passions and inflame the anger of less well-balanced followers.

This may be free speech, but with the right comes the responsibility - you can't yell "fire" in a crowded movie theater for a reason. Neither can you constantly advocate death for a class of people without bearing some responsibility for what happens when someone inspired by your words takes action.
Posted by The SO Next Door at 8:00 PM
Email ThisBlogThis!Share to TwitterShare to FacebookShare to Pinterest