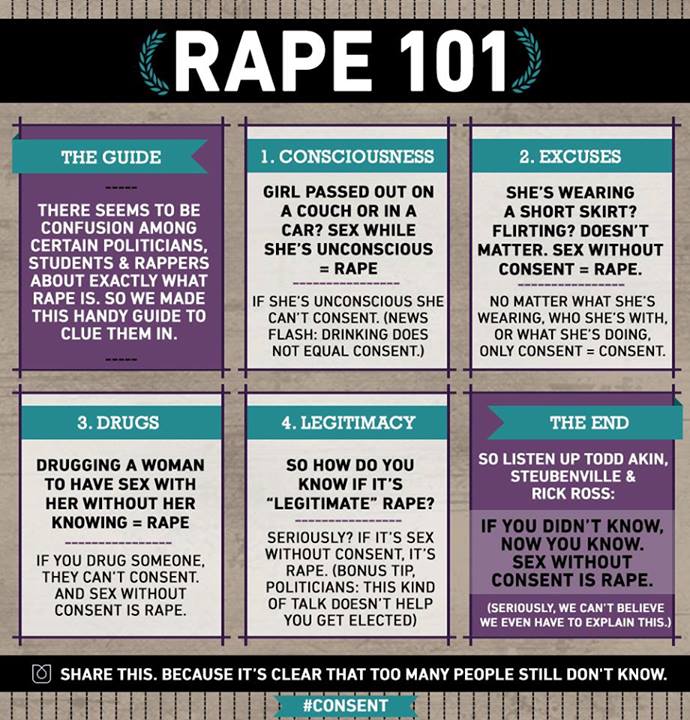 This is all good advice, and really, I can't stress enough that this graphic is spot-on.

Again, spot-on, and something that needed to be said. In the current culture of "believe the victim, no matter what" because she "made the brave choice" to come forward, accusations of rape have become the weapon of choice of the jilted girlfriend.

Understand this, though: Not all accusations of rape are false. And I don't believe that the commenter meant to imply that. On the flip side of the coin, we (if we are being honest with ourselves) need to acknowledge that it does happen.

In context (a post with a graphic that gives advice about what is and isn't rape), a comment furthering that advice is most decidedly not "victim blaming". Declaring it to be so is, at best, an attempt to silence an uncomfortable truth, much like "victim blaming" itself does.

Education about what is and isn't rape should cover both sides of the street. Distilled down to its bare essence, the education we need to be teaching our young men and women is:


In a he said/she said case with no other witnesses, where the presence of biological evidence is damning and the pressure to believe the victim over the accused is high (lest there be an accusation of "victim blaming", oh the irony), it happens. Too often, and with life-changing consequences for the accused.

So what is victim blaming? Simply put, victim blaming is when it is suggested that someone bears some responsibility for the fact that a crime (usually sexual assault, but including mugging, robbery, and others) was committed against them. It takes the form of statements such as:


"You shouldn't have worn that."

"You shouldn't have walked alone at night."

"You should have locked your doors."

Talking about sexual assault is difficult - it is a minefield filled with triggers and powerful emotions. However, those emotions, while very valid, have no place in a discussion about what is and isn't rape. Stating that someone shouldn't take back consent after it is given is not victim blaming. Giving consent, having sex, and then taking back that consent out of a desire to gain revenge is wrong, just as rape itself is wrong.
Posted by The SO Next Door at 7:33 AM No comments:
Email ThisBlogThis!Share to TwitterShare to FacebookShare to Pinterest
Newer Posts Older Posts Home
Subscribe to: Posts (Atom)