Aside from the documented cases of serial rapists and serial molesters, sex crime is rarely a planned activity. And yet, after high profile cases such as Steubenville, the blogs and comments in news articles are filled with calls for castration or even execution as an effective way to make sure "it never happens again". One commenter I saw advocated crushing the testicles of the two young men convicted in the Steubenville case between two large rocks as a first punishment, in order to "remove the tools used to commit the crime" - followed by public execution for a second offense.

This, of course, ignores the well-established data that says sex offenders have one of the lowest recidivism rates. While no predictor of future action is 100% accurate, the best indicator we have is the sum of the actions of those who have come before. That data says that these young men have a very low chance of ever doing something like this again. Testicle smashing and execution are not about justice - they're about vengeance.

In the case in Steubenville, as in most sex crime cases, it was a crime of opportunity, fueled by an inhibition and judgement-lowering substance (in this case, alcohol, and possibly drugs) and mob mentality. This does not excuse the actions of these young men, nor does it justify them. The young woman should have been safe to become drunk and incapacitated - and it was the moral duty of those around her to make sure she stayed safe while in that state.Humans are funny animals. In an intoxicated state, and in the presence of peers, we do things that we normally would not do. This is why so many family reunions and gatherings end in fights when a simmering resentment normally held in check is released by alcohol. It's the basis of the "Here, hold my beer" and the "Hey, y'all, watch this" redneck jokes. One only has to look at the riots after sports championships are won to understand that the intoxication need not come from alcohol or other substances. People get trampled to death on Black Friday over a flat-screen TV. Individually, these boys would probably have taken the right action. Sadly, like the rest of humanity, in a group and in the presence of alcohol, different dynamics and thought processes took over.

However, after the verdicts and sentences, something strange happened. Feminist blogs and commenters began to talk about "rape culture". Hashtags appeared on Twitter; graphics showed up on Facebook; blogs began to overflow with rants about the injustice of the Steubenville sentences as evidence of "rape culture". 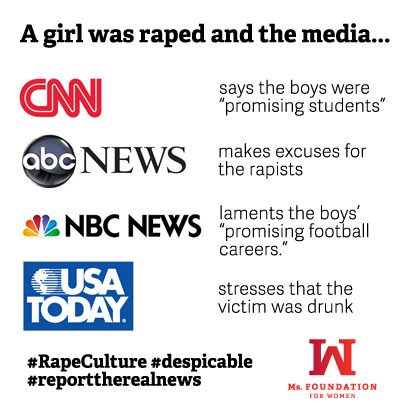 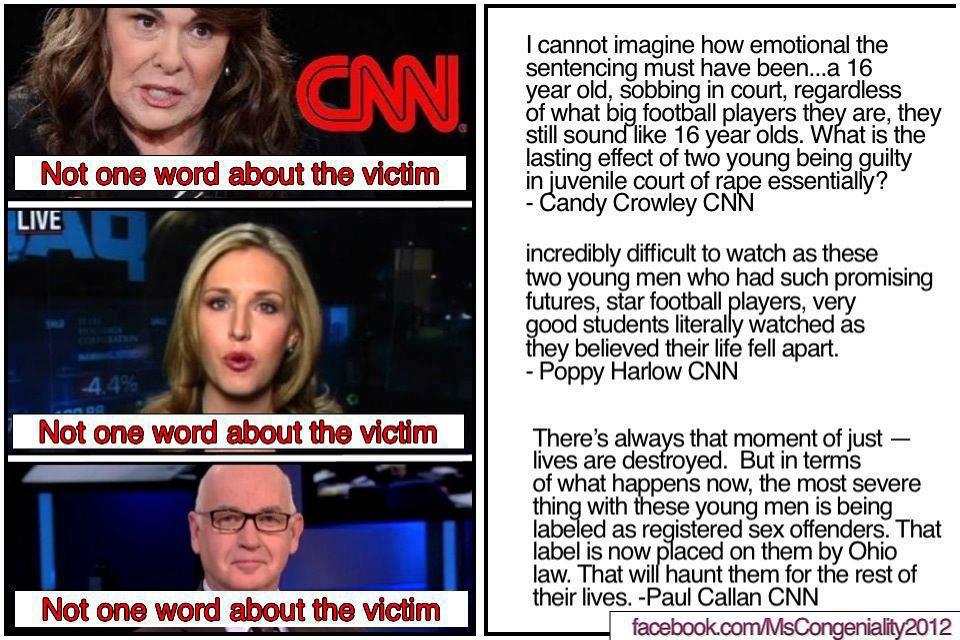 It is, of course, complete and utter bullshit. The feminist outcry isn't about justice for the victim; it's about vengance against the perpetrators. "Where is the talk about the victim?" they cry. What they don't understand is that the news media cannot give any information about the "promising student" the victim is. They cannot talk about her career plans. They cannot identify her in any way, because the laws championed by these same feminists years ago in the name of protecting the victim from having details of her past exposed now prevents the news from revealing anything, unless and until the victim herself comes forward. In the absence of anything to report about the victim, the news media instead focuses on the one thing they can - the perpetrators. If we truly care about justice, and truly care about healing the wounds that all involved have suffered, we would have sympathy for both the victim and the perpetrators in everything they have lost - the careers, the hard work, the innocence of youth. As the law and current situation stands, we are left with only the ability to mourn what these young men have lost in a moment of drunken stupidity.

But, there is a darker side to "rape culture", one that the feminists don't acknowledge. You're not supposed to believe that this could happen: 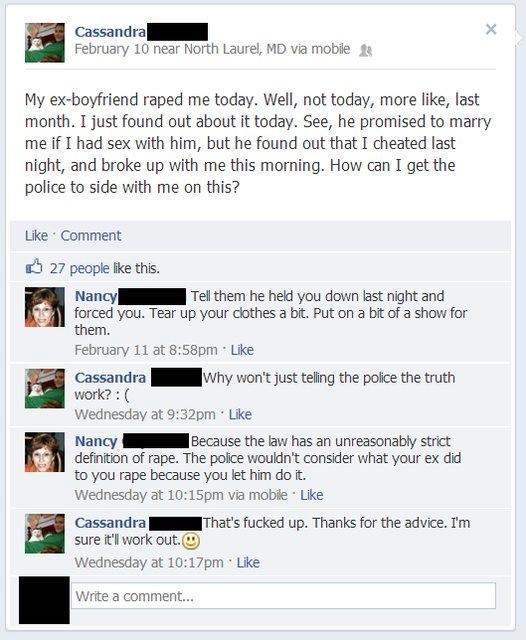 The feminists cry out, the victim is to be believed at all costs. Even if the story doesn't quite make sense. The police have "an unreasonably strict definition of rape." And, in order to be believed, the victim need only "put on a bit of a show".

This is the true "rape culture". It's rape used as a weapon - not only by men against women, but by women against men. Think on this, the next time you condemn someone of being on the Sex Offender Registry. That "pervert" down the street might just be as innocent as they claim. Then again, they might not be so innocent. You don't know.

And you'll never know, if all you know is based upon a listing on a website.
Posted by The SO Next Door at 8:26 AM
Email ThisBlogThis!Share to TwitterShare to FacebookShare to Pinterest